Round 14 saw the Two Blues take on the Dodges Ferry Sharks on our home turf of Anzac.

The reserves side went into the game bolstered by some handy inclusions from the side that went down to New Norfolk but, we were still aware of the fact that the Sharks were playing some good football and building momentum from their slow start to the season.

We started the game the way that we intended with intensity and lots of run. Our skills were good and we gave our forwards plenty of football. At the first break we held a 21 points lead and got the start we wanted.

This soon came crashing down and when the pressure was put back onto us we started to become undisciplined and unfocused which in turn gave our opponents too many easy goals.

In the second half our attitude, our work rate and our decision making all improved and we bounced back to play some very good football including a last quarter in which we kicked nine goals and kept the Sharks scoreless.

Mick 'Micka' Hemming, Mitch 'Lil' Leale and Mick 'Lofty' Grimsey were solid in defense all game.  Our midfielders in Phil 'Philphy' Ashlin and Jeremey 'Jez' Pfeiffer knocked up getting possessions and Dave 'Country' Smith up forward held everything that came his way.

We still have a lot of improvement in us as a team and we need to play four quarters of good football and eliminate the bad quarter that we so often play.  This week we play the ladder leaders in Kingborough, and we will need a four quarter effort to knock the Tigers off.

The round 9 clash against a struggling Sorell in the rain on home turf has now consolidated our position in the top four of the ladder.  We now sit in third position with a 6-2 win/loss ratio.

In the first rain affected game of the season, it was going to be interesting how the side took to the conditions and from the first bounce we took control of the game.  Playing in front and being first to the football and while the ball was reasonable dry and not like a brick our skills especially our delivery into our forward line was excellent.

The majority of the game was played in this fashion apart from our second quarter, where we let ourselves down by not playing to the conditions.  We started to become lazy and second to the contest and it showed by the amount of free kicks we gave away.

Simon McCarthy on the wing was in excellent form  and relished in the conditions with a heap of quality possessions.  Our ruck men and on-ballers dominated the center clearances and were well served by Chris Harper and Andrew Clarke who won the hard ball.  Down in defense Stuart Dare playing the full back role was a rock as where Phil Ashlin and Adrian Pennicott.  Up forward Mark Rutherford provided a handful for his opponents and Dave Smith kicked another bag of goals.

This weekend we are on the road as we travel down to Cygnet to take on the Port Power.  We need to keep our work rate up for the whole game and keep working on our deficiencies to be competitive with the top sides.

With the season about a third of the way through, I thought I would do an update on how our season has been progressing.

We find ourselves in third spot on the ladder with five wins and two losses.  The two losses that we have suffered came from Claremont and Kingborough, the two teams above us on the ladder.

The club has once again found its self in a good position with good numbers and the reserves (due to club injuries & unavailability) have already had a total of 43 players play one game or more this season.  A special mention should go to the underage players in Ian "Red" Mackenzie, Jordan "Jordy" McCullum and Kieran "Kizza" Isles who when given the chance to play reserves stepped up and showed they are more than capable.

As a reserves coach it is always good to see players step up to senior level and play.  This season up to 12 players have already played in both senior grades.

The great turn around in players has not helped the reserves side due to the fact that we can have up to six changes in the team per week, but to our credit we have soldiered on and kept winning games.

Our success so far this year has been contributed greatly by the players that are consistently doing the right things by turning up to training and giving 100%.  Down back Wally "JT" Dare has provided the attack and run while the leadership of Ricky "BattMan" Batt and Adrian "AJ" Pennicott has given us the platform to attack off The "Michele" Pfeiffer brothers (Henry & Jeremy), through the middle have given us some extra class and polish.  The hard work down back and through the middle has been capped off by Dave "Country" Smith up forward who has been a focal point for us.

I’m sure we are all looking forward to the rest of the season with some big challenges in front of us.

This week the reserves took on the Central Hawks at Oatlands, who even though undermanned were always going to give us a physical contest on their home turf.

We won the toss and with a decent breeze blowing to the eastern end of the ground, we decided to kick with it.

Knowing that the breeze was not going to do it for us we went out and played some good football.  Playing in front with quick ball movement and some good skills allowed us to set our game up and go into the first break with a seven goal advantage.

The second quarter was a lot different as we had to work a lot harder to move the ball quickly into our forward line.  We started to be second to the footy and started to get lazy, prepared to leave the hard work up to someone else.

After the main break we started to get our game back on track and the second half seen our attack on the football improve and our run to link up or to get numbers to a contest get better as we continued to run the legs off our opponents to win the  game by around 10 goals. 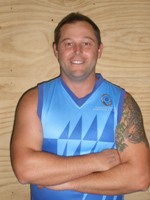 Our main focal point up forward was Dave 'Country' Smith who even though double teamed and out numbered, led to the right spots and then converted his opportunities to finish the game with five goals.  Paul 'Smokey' Jackson and Chris 'Rusty' Rusell gave the on-ballers good use of the ball and presented well across half forward all day.  The 'Michelle' Pfeiffer brothers got plenty of the football and fed our forward with some accurate disposal and Andy 'Tonguey' Clarke, Andrew 'AK' Kennedy and Jesse 'Sammy' Hamill played some good hard in and under contested football.

We now look forward to the challenge that is Claremont who are undefeated and sit on top of the ladder.

This week the reserves took on Kingborough on our home turf at Anzac Park.

We went into the game knowing that Kingborough were going to be a challenge and that a win would set up our season and give us a chance to get back into at least the top two on the ladder.

Disappointingly we were outplayed for the first half of the game and even though we fought the game out we played to inconsistent to challenge a top team and eventually lost by five goals.

As a team we went into the game coming off the bye and three good wins expecting things to just happen.  All the good things we had been doing in the past had gone. Our run and our attack on the football was poor.  At least this gives us an idea on were improvement is needed.

Our back line was under attack all day and the score would have been worse if it wasn’t for the efforts of Chris 'CT' Turner and Ricky Batt.  David 'Country' Smith up forward gave as an option and didn’t miss his opportunities as did Stuart 'Stu-Fu' Dare.  In the middle Paul 'Smokey' Jackson gave us first use of the ball but we could not capitalize apart from the clearance work of Paul 'PJ' Johnston.  Around the ground there was not much to be happy about as we were outnumbered at many of the contests and stoppages but Chris 'Rusty' Russell and Jeremy Pfeiffer battled hard all day.

This weekend we take on Central Hawks at Oatlands and we should expect a hard challenge.  If we want to give ourselves a chance of winning a big improvement is needed from last week effort.